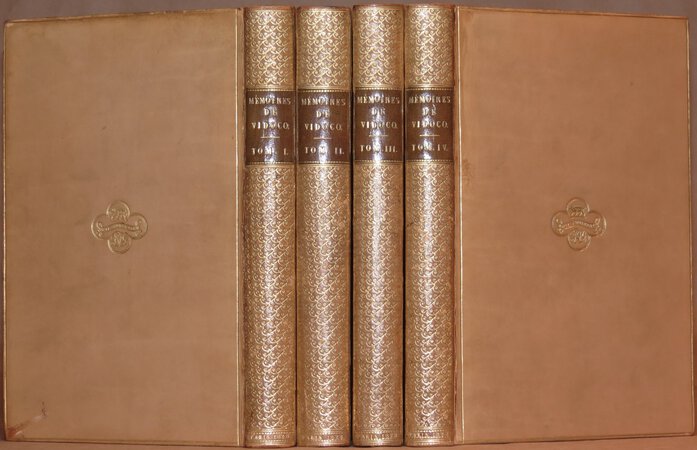 Paris: Tenon, 1828-29. 4 volume set, 8 1/4 inches tall. First Edition. A splendid full calf of the period, an ancient catalogue slip attributes it to the great C. Lewis, with dense gilt tooling and olive labels on smooth backs. The arms of the 3rd Earl of Clare are gilt blocked onto the boards. Signed by Vidocq in the first 3 volumes as called for. Eugene Vidocq was an adventurer and detective who helped create the 'secret police' in France and is considered the father of modern criminology. Dismissed in 1832 for a theft that he allegedly organised, Vidocq created a police agency 'Police de Sûreté", the prototype of modern detective agencies. Known all over France as a remarkably audacious man, Vidocq was a friend of such authors as Victor Hogo, Honoré de Balzac, Eugène Sue and Alexandre Dumas père and influenced Edgar Allen Poe. The figure of Vidocq is believed to have inspired Balzac's creation of the criminal genius Vautrin, one of the most vivid characters to appear in his novelistic series La Comédie Humaine. From the residual library of Charles Butler (1821-1910) of Warren Wood in Hatfield. The majority of his library was sold at Sotheby's on 5th April 1911. A wonderful set of this great work In the original French.