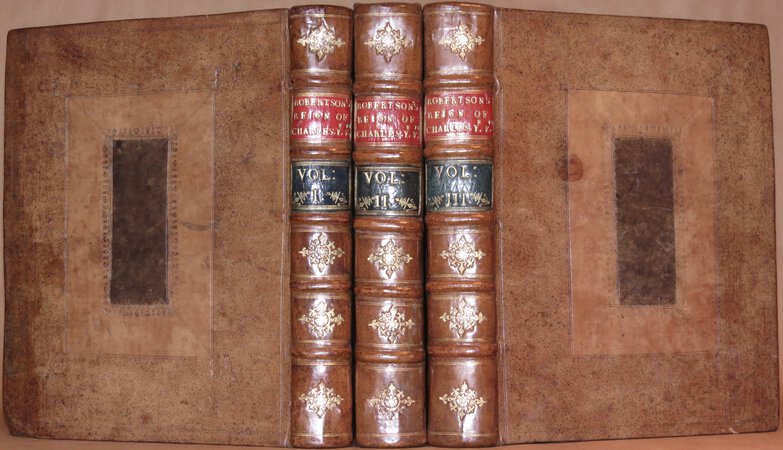 The History of the Reign of the Emperor Charles V.

London: W. and W. Strahan, 1769, 1796. 3 volume set,10 3/4 inches tall. First edition, tall quarto, in full calf with 'Cambridge panel'. This is a magnificent binding with a great patina. It appears to have been carved from mahogany, with raised bands and twin beautifully tooled labels. Large gilt centre tools and gilt fillets decorate the panels. The boards have classic 'Cambridges panels', inked, plain and speckled with elaborate blind tooling. Speckled pink edges. A dozen or so leaves in the first volume have light creasing and superficial staining at the tips of the foredge, this doesn't affect the shape or get near the text. With the martial bookplate of Vane Londonderry, From the library of Charles William Vane (formerly Stewart), third Marquess of Londonderry. Vane served with distinction throughout the Peninsula War. His dashing and dandified portrait by Sir Thomas Lawrence is at the National Portrait Gallery. He amassed magnificent libraries in his various Country Houses. This classic history covers the life of the Great Holy Roman Emperor 'with a View of the Progress of Society in Europe, From the Subversion of the Roman Empire, to the Beginning of the Sixteenth Century’. A wonderful set.