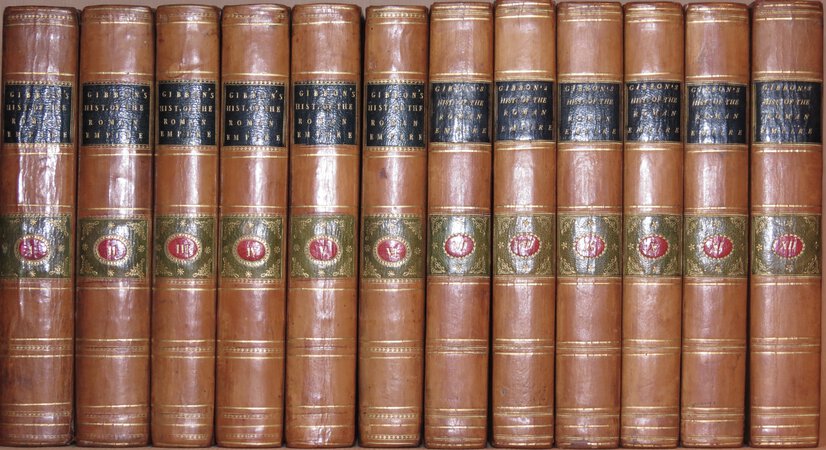 The History of the Decline and Fall of the Roman Empire.

London: Strahan and Cadell, 1788-1790. 12 volume set, 8 1/2 inches tall full 18th century calf with a smooth back, glorious twin labels and gilt pallets on the spine. The plain boards are framed within a twin fillet. yellow edges. Engraved frontispiece portrait, 3 folding engraved maps and the half titles to volumes 7-12, not called for in volumes 1-6. This is the first complete London octavo edition comprising the reprint of volumes 1-6 (first issued 1783, now dated 1788 and the first appearance of volumes 7-12, dated 1790. Consequently there is a minor change in the tools used by the binder on the first 6 volumes and the last 6 volumes. Volume I, as so often, shows more wear than the remainder of the set as the reader ran out of steam! There is a small loss to a long defunct insect to the lower corner of the upper board.
A superb set of "this masterpiece of historical penetration and literary style has remained one of the ageless historical works which.....maintain their hold upon the layman and continue to stimulate the scholar". "Gibbon brought a width of vision and a critical mastery of the available sources which have not been equaled to this day; and the result was clothed in an inimitable prose that was elevated, cadenced, and graceful'. (P.M.M.).