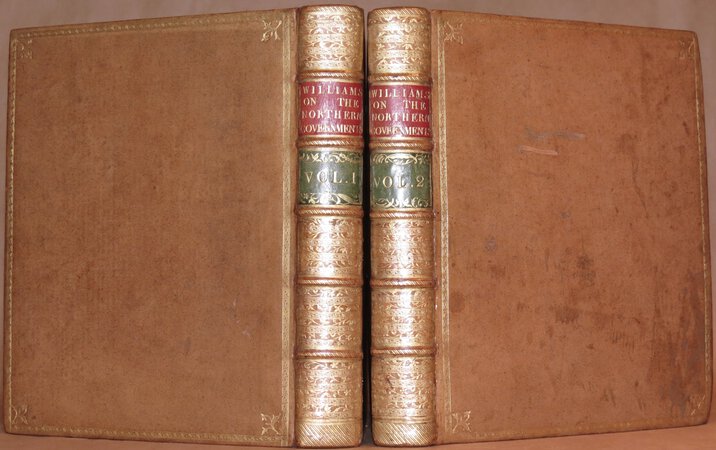 Northern Governments. The rise, progress, and present state of the northern governments; viz. the United Provinces, Denmark, Sweden, Russia, and Poland: or, Observations on the nature, constitution, religion, laws, policy, customs, and commerce of each government : the manners and dispositions of the people; their military forces by land and sea; the revenues and resources of each power; and on the circumstances and conjunctures which have contributed to produce the various revolutions which have happened in them. The whole digested from the most authentic records and histories, and from the reflections and remarks made during a tour of five years through these nations.

London: T. Becket, 1777. 2 volume set, 11 inches tall. A magnificent Georgian full speckled calf with gilt raised bands, superb twin labels and dense gilt tooling to the panels. The boards are framed with gilt centre tools and a gilt roll. Blue edges. Fine copies of this great work are very scarce and this one is spectacular. With the martial bookplate of Vane Londonderry, From the library of Charles William Vane (formerly Stewart), third Marquess of Londonderry. Vane served with distinction throughout the Peninsula War. His dashing and dandified portrait by Sir Thomas Lawrence is at the National Portrait Gallery. He amassed magnificent libraries in his various Country Houses.