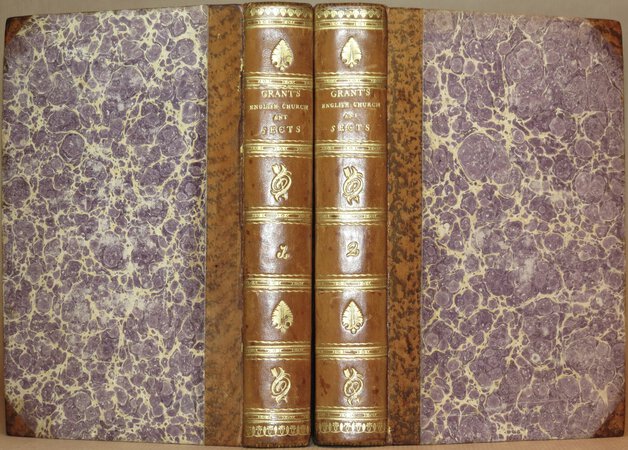 < >
A SCARCE WORK IN A FINE HALF REGENCY CALF
GRANT, Johnson

A Summary of the History of the English Church, and of the Sects which have Departed from its Communion.

London: Hatchard, 1811 & 1814. 2 volumes, 9 inches tall. A fine Regency half calf with gilt bands and curious gilt centre tools. With the splendid martial Stewart bookplate. At the head of the title page is a neat ink inscription: 'The Gift of a Friend' the the signature of Lord Stewart trimmed in half by the bookbinder! From the library of Charles William Vane (formerly Stewart), third Marquess of Londonderry. Vane served with distinction throughout the Peninsula War. His dashing and dandified portrait by Sir Thomas Lawrence is at the National Portrait Gallery. He amassed magnificent libraries in his various Country Houses. This is the very scarce first printing of the first 2 volumes, as called for on the title page. A further 2 volumes were printed many years later.