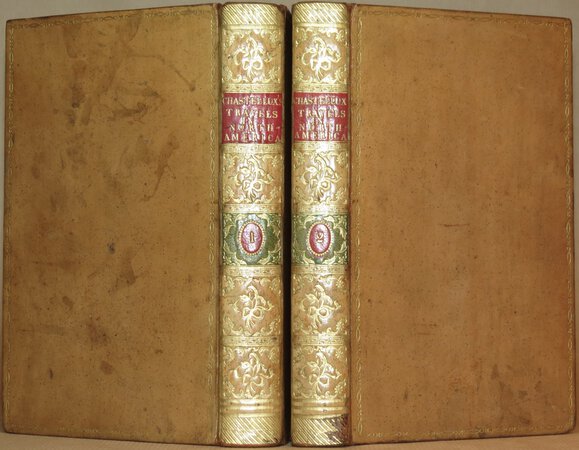 Travels in North-America, in the years 1780-1782. Translated from the French by an English Gentleman (J.Kent) who resided in America at that Period.....

London: Robinson, 1787. 2 volume set, 8 1/2 inches tall. A wonderful 18th century calf binding with gilt bands, superb twin labels and splendid floral gilt tooling to the panels. An ornate gilt fillet frames the speckled boards. With the 2 folding engraved maps and 3 folding engraved plates. The first English edition of what has been described as "The first trustworthy record of life in the United States." Howes. U.S. Iana. Slight superficial loss to a long defunct insect to the foot of volume 2 and slight rubbing and marking the the boards but overall in excellent condition. With the bookplate of Vane Londonderry. From the library of Charles William Vane (formerly Stewart), third Marquess of Londonderry. Vane served with distinction throughout the Peninsula War. His dashing and dandified portrait by Sir Thomas Lawrence is at the National Portrait Gallery. He amassed magnificent libraries in his various Country Houses. The Marquis of Chastellux, French general and author. In 1870 he went to the U.S., where he served with honour for 3 years, as Major General, in Rochambeau's forces. He was a personal friend of George Washington. This work contains reminiscences of Washington, La Fayette and General Knox amongst many others. It abounds, not only with observations of importance, but also with details of even the most trifling, but fascinating, incidents that bad roads, inconvenient inns, and distracted times usually afford.