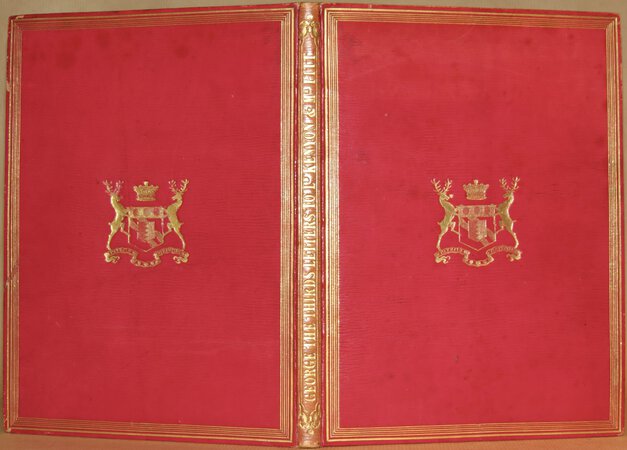 Letters from his late Majesty to the late Lord Kenyon, on the Coronation Oath. With his Lordship's Answers: and Letters of the Rt. Hon. William Pitt to his late Majesty, with his Majesty's Answers, Previous to the Dissolution of the Ministry in 1801.

London: John Murray, 1827. Full morocco, 11 inches tall. A magnificent Regency full straight grain morocco with the gilt title within a cartouche to the spine and the arms of the Earl of Leitrim (motto "Patris Virtutibus") to the boards. With frontispiece facsimile of an ALS from King George III. Slight rubbing to the head and tail of the spine but with no splitting or loss. This superb regency binding, presumably commissioned by Nathaniel Clements, 2nd Earl of Leitrim (1768-1858) houses a controversial series of letters between the King and his ministers.