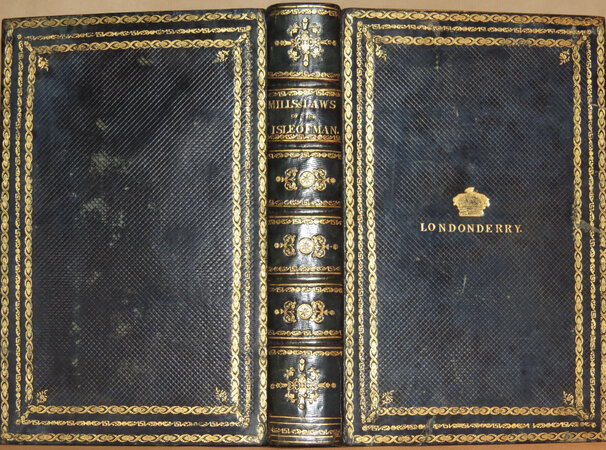 The Ancient Ordinances and Statute Laws of the Isle of Man.

Douglas: Printed at the Phoenix Press, 1821. Full calf, 12 inches tall. An extraordinary Georgian full diced calf with raised bands, bold gilt tooling to the panels and a series of gilt rolls framing the diced boards. Gilt dentelles and all Edges. Printed and probably bound in the Isle of Man. From the library of Lord Londonderry, whose name and coronet is embossed at the centre of the upper board. From the library of Charles William Vane (formerly Stewart), third Marquess of Londonderry. Vane served with distinction throughout the Peninsula War. His dashing and dandified portrait by Sir Thomas Lawrence is at the National Portrait Gallery. He amassed magnificent libraries in his various Country Houses. Some rubbing and scuffing but with no splitting or loss, a splendid copy of this finely printed and encyclopaedic survey and history of the laws of the Isle of Man.