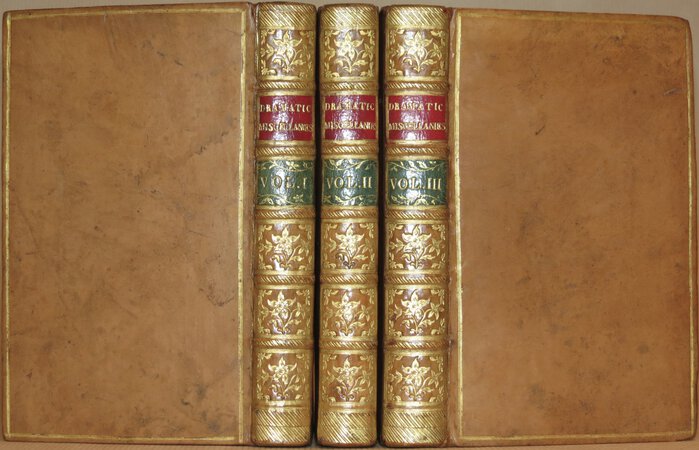 Dramatic Miscellanies: Consisting of Critical Observations on Several Plays of Shakespeare: with a Review of his Principal Characters, and Those of Various Eminent Writers, as Represented by Mr. Garrick, and other Celebrated Comedians.

London: For the Author, 1783-4. 3 volume set, 7 1/2 inches tall. A particularly attractive 18th century full calf binding with gilt raised bands, green and red labels and delightful gilt floral tooling to the panels. The boards, which are somewhat soiled, are framed with triple fillets. Slight staining to the text block of volume 3 which has not swollen the shape of the binding at all. Thomas Davies had a successful career as an actor before setting up as a bookseller in Covent Garden, his shop becoming a meeting place for the theatrical and literary world. It was in the back parlour of his shop that Boswell first met Johnson. In the 1770's Davies turned to writing, particularly biographies. His most important biography was 'Memoirs of the Life of David Garrick' which was published in 1780. Despite some staining this is still a most attractive example of this work. From the library of Charles William Vane (formerly Stewart), third Marquess of Londonderry, and with his elaborate bookplate. Vane served with distinction throughout the Peninsula War. His dashing and dandified portrait by Sir Thomas Lawrence is at the National Portrait Gallery. He amassed magnificent libraries in his various Country Houses.