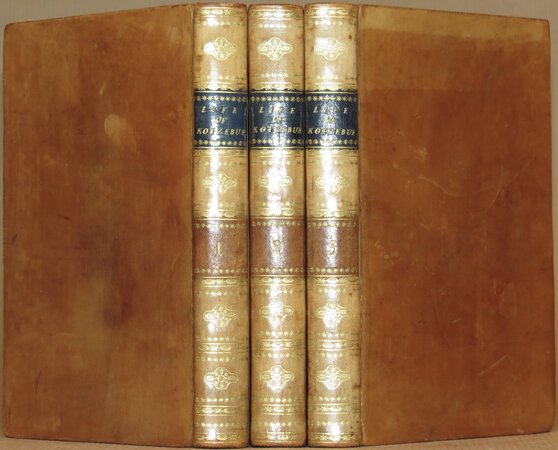 Most Remarkable Year in the Life of Augustus von Kotzebue; Containing an Account of his Exile into Siberia, and of the Other Extraordinary Events Which Happened to him in Russia.

London: Richard Phillips, 1802. 3 volume set, 6 1/4 inches tall. An exquisite full Georgian calf with gilt bands, twin labels and ornate and delicate gilt tooling to the panels. Portrait and one engraved frontispiece showing 'A Scene in a Tartar Village'. Blue speckled edges. A scarce title describing the extraordinary life of this German dramatist, notoriously murdered by a liberal student. From the library of Charles William Vane (formerly Stewart), third Marquess of Londonderry. Vane served with distinction throughout the Peninsula War. His dashing and dandified portrait by Sir Thomas Lawrence is at the National Portrait Gallery. He amassed magnificent libraries in his various Country Houses.