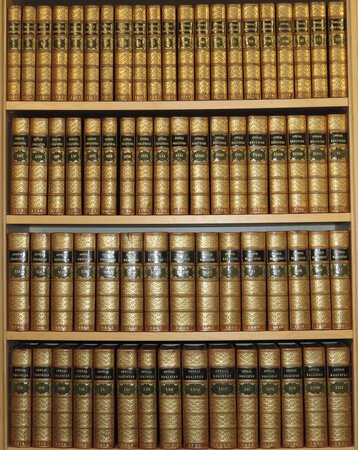 The Annual Register, or a View of the History, Politics, and Literature.

London: Dodsley et al., 1760-1835. 77 volumes, 8 1/2 inches tall. A magnificent run of this important periodical in full calf in gilt raised bands, twin labels and superb extra gilt tooling to the panels. With the ticket of Bain, bookseller of 1, Haymarket. Some rubbing, chips and cracking but still a highly impressive set. The first volume is the seventh edition, from volume II the vast majority are first editions. This consecutive run lacks volume XXXII. Speckled pink edges. A splendid run of this highly important source for the political and literary events of the time including the American Wars of Independence and the Napoleonic Wars. From the library of Charles William Vane (formerly Stewart), third Marquess of Londonderry. Vane served with distinction throughout the Peninsula War. His dashing and dandified portrait by Sir Thomas Lawrence is at the National Portrait Gallery. He amassed magnificent libraries in his various Country Houses.