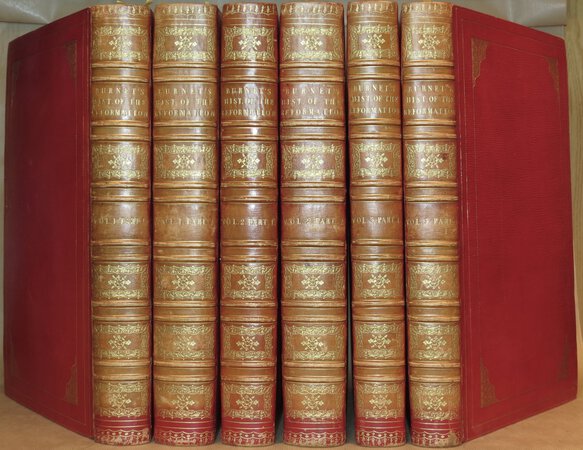 The History of the Reformation of the Church of England.

London: Richard Chiswell, 1681, 1683 & 1715. 3 volume set bound in 6, 18 inches tall. A fabulous full straight grain morocco by Staggemeier and Welcher (and with their ticket) with twin gilt raised bands and superb, delicate gilt tooling to the panels. The boards have triple gilt flllets and splendid gilt corner tooling so typical of the finest work of the late eighteenth century. Gilt tooled dentelles and all edges. Staggemeier & Welcher were part of a group of German bookbinders including Baumgarten, Walther, Hering and Kalthoeber who reinvigorated the London trade and produced bindings of the very finest quality during this period. These volumes are of that quality and are in exceptional condition though the spines are somewhat faded by the sun. Internally the set is spotless. With the bookplate of John Charles Crowle and later from the library of Morningthorpe Manor. This set was bound and extra-illustrated in 1798 with 472 plates, as well as the 16 plates called for. Many of the plates are exceptional, and include fine examples by Hollar, Kip, Houbarken, Bartalozzi and Houston, obviously none later than the 18th century. Gilbert Burnet wrote this great history of the Reformation, covering the reigns of King Henry VIII and of Queen Elizabeth. Volumes 1 and 2 are the second, corrected edition, volume 3 is the first edition. For generations this was the definitive work on this most traumatic period of English history which marked the destruction of a thousand years of Monastic history and led to the Church of England breaking away from the authority of the Pope and the Roman Catholic Church, changing many aspects of life in England for ever. This is an exceptionally tall copy, ruled in red throughout. A unique and truly exceptional set.