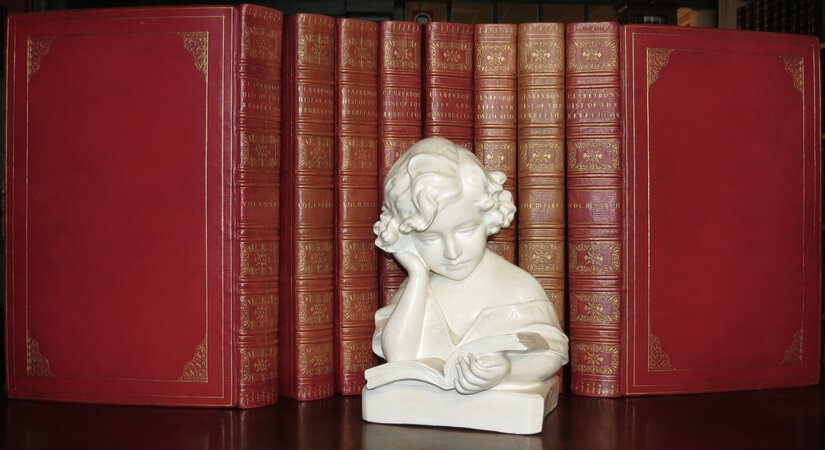 The History of the Rebellion and Civil Wars in England begun in the Year 1641 (Bound uniformly with) The Life of Edward Earl of Clarendon…..Written by Himself.

Oxford: The Theatre/The Clarendon Printing House, 1702-1704/1759. 4 volumes bound in 8, 18.5 inches tall. A magnificent and exceptionally tall 18th century full straight grain morocco by Walther, and with his binder's tickets. The set was bound and extra-illustrated in 1794, with twin gilt raised bands, exquisite gilt tooling to the panels, the boards are framed within triple fillets with delicate lace like gilt corner tooling. Gilt dentelles and all edges. Some fading to the spines. Bookplate of John Charles Crowle whose fine extra-illustrated library was at Dalham Tower, Cumbria. This set was lot 1059 at the Morningthorpe Manor Sale at Key's in September 2016 where it sold for over £20,000 including premium. Very regrettably, many of the extra-illustrations were then removed. This has caused some damage to 2 of the spines, in particular volume 1 where a scalpel's neat incision can be seen running up the panels. The volumes also consequently have a varying degree of wedge shapes owing to the loss of some leaves. 345 extra-illustrations remain. What remains, though much diminished and with signs of damage, is tall red-ruled set of first edition with all the text and several hundred superb engraved extra-illustrations in an absolutely magnificent morocco binding by one of the greatest London bookbinders of the late 18th century.