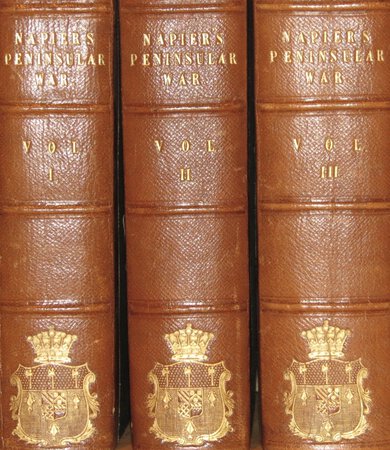 < >
QUARTER MOROCCO FROM THE LIBRARY OF THE EARL OF LOVELACE
NAPIER, W.F.P.

History of the War in the Peninsular and in the South of France, from the year 1807 to the year 1814.

Paris: Charles Hingray, 1839. 3 volume set, 8.75 inches tall. A scarce edition in a curious quarter morocco binding with raised bands, gilt titles and the crest of the Earl of Lovelace in the bottom panel. With the Earl's Library stamp and name on the free endpapers and a further crest on the half titles. Ada Lovelace, daughter of Lord Byron and often regarded as the first computer programmer, was married to the first Earl of Lovelace. Slightly rubbed and with slight discolouration to the cloth boards.