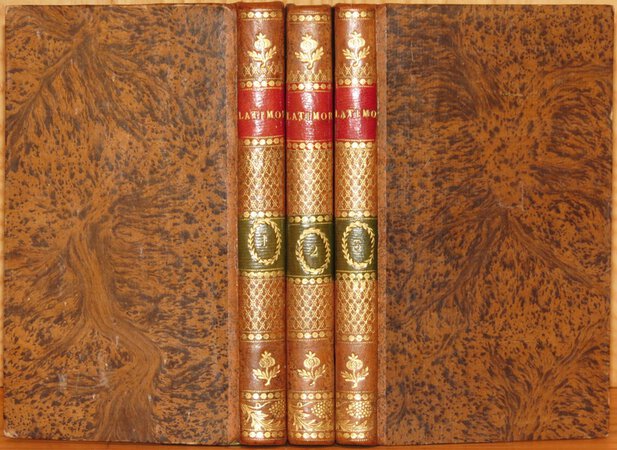 Paris: Villet ‘et à Verdun’, 1807. 3 volume set, 7 inches tall. Quarter calf with gilt bands, twin labels and charming gilt tooling to the panels. With the binders ticket. A rare French edition of Surr’s Splendid Misery (1801), perhaps the first. It is one of two French translations of 1807, the other entitled Splendeur et souffrance published by Maradan. It is not clear which was the first. Though little remembered, Surr’s several novels of fashionable British society were bestsellers in England and were much read in both France and Germany. He was born in London in c. 1770 and was educated at Christ’s Hospital before becoming a clerk at the Bank of England. Garside, Raven and Schöwerling, The English Novel 1770-1829, 1801, 64 (noting the Splendeur et souffrance edition only. OCLC lists copies pf Latimore at Bn and University of Illinois only; COPAC adds no British copies. For Splendeur et souffrance OCLC lists copies at Bn and Universities of Erfurt and Göttingen only; COPAC adds no British copies.