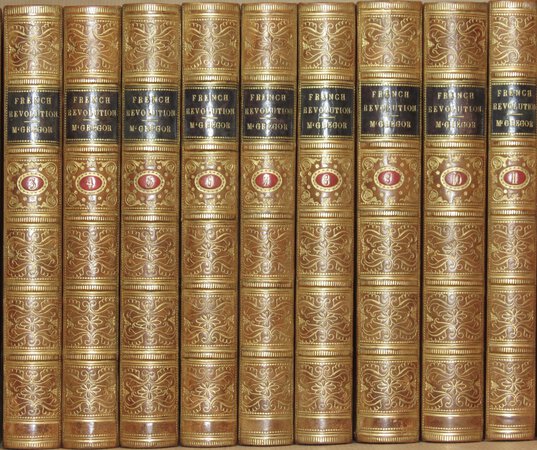 History of The French Revolution And The Wars Resulting From That Memorable Event. Comprehending The political And Military Annals of Europe, From The Meeting of The States General at Versailles in 1789 to The Battle of Waterloo.

Waterford: John Bull, 1816. 12 volumes, 8.35 inches tall. A superb set of this very scarce work in a classic mid Victorian half calf binding. With gilt raised bands, labels and dense gilt tooling to the panels. The first seven volumes were published in Waterford and are embellished with portraits and maps; the last five volumes were published in Dublin by which time the publisher's money or enthusiasm for illustration had disappeared. Volume VI also contains a Dedication to Charles Chetwynd, Earl Talbot, General Governor of Ireland. A former owner has neatly inscribed his name, W.M. Humphreys, at the head of page 20 of several volumes. There are a total of twenty engraved portraits and five engraved maps and plans. Copac records two copies at Trinity College Dublin and one at Oxford, Cambridge and the National Trust. A fine set in excellent condition.