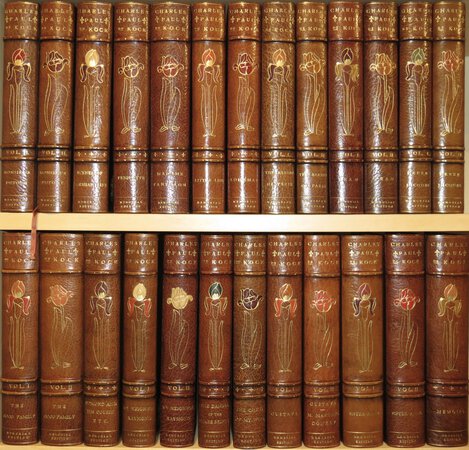 London, Boston and Paris: Quinby, 1904. 25 volume set, 9.25 inches tall. A magnificent half morocco binding with gilt titles and top edge, exceptionally tall gilt raised bands and fine floral tooling with calf onlays in the art nouveau style on the spines. With the armorial bookplate of John C. Wellington, with gilt monogram on the upper boards and evidence of a second bookplate that has been carefully removed from the free endpapers. Illustrated throughout. The spines have faded to a rich brown giving a very pleasing effect on the shelf. Charles de Kock was an immensely popular French novelist in the second half of the 19th century. This deluxe edition was translated into English by Arthur Martin. De Kock was hugely popular in the English speaking world, amongst many others, Thackeray was a particular admirer. A stunning set.